In 1999, the now long-suffering Mrs Tinted was only the short suffering Mrs Tinted. We decided to fly to California for our first wedding anniversary in fact: into San Francisco; a brief excursion north into Marin County (mountain biking pilgrimage), then Napa (wine pilgrimage) then down the fault line – the Big Sur coast (“Warning, bends in road for next 99 miles”) via Carmel (Clint Eastwood), Monterrey (Jack?), then Saint Luis Obispo to Santa Barbara (Santa Barbara Brewing Company, good hefeweizen and chicken burger), avoiding LA (saving the smog for another time) before R&R in San Diego.

I had few expectations of San Diego: it was designed to be a restful full stop at the end of our holiday before the flight home. It turned out to be yet another highlight.

From a beer point of view, to say California is a delight seems trite and unsurprising nowadays. Back then however, the beer scene was still emerging, albeit at pace, but remained centred on San Francisco. We drank Anchor of course, which was all that it promised and more: malty and dry, yet smooth too. We found great bars in the city (Jack’s Cannery) and in the country – a small brewpub in Napa City served a rip-roaring IPA that we wolfed down with wood fired pizzas before it became standard. But San Diego? Well, suffice it to say, we weren’t expecting any such surprises: we were going for the weather, nice beaches, no doubt, a day trip to Tihuana and probably a few bottles of Tecate.

Oh, I know that beer geeks will likely sniff: but we both really enjoyed Karl Strauss Brewpub (and I’m happy to admit that I Iike ‘Rock Bottom’ too – better that than a Hungry Horse any day). Most of downtown San Diego is so unprepossessing, and it fitted right in, with a concrete camouflaged frontage. Not the beers though: there was Red Trolley Ale, immeasurably better than the average for that oddly faux – and typically unrewarding – beer style of ‘Irish Red’. It foamed and fizzed and had a lovely malt character. Tower 10 IPA, now a range mainstay, was what you’d expect: a blast of grapefruity C hops and a solid malt backbone. And located dangerously close to Hotel Bric-a-Brac and opposite the airport runway (here I go, ‘sell, sell, sell’) was Oggi’s Pizza & Brewing Co. We ordered take out from it one night and only called in right at the end of the holiday:  cue general werreting and gnashing of teeth. The beer was nothing memorable (for craft) other than it kept great company: the view across the beach, the bay, the gentle sizzle from what most Americans consider the best climate in the country. Oh, and pizza. Don’t forget the pizza.

Today I suppose much of the talk of San Diego is about Stone Brewing. In ‘99, it was a shadow of its future self and I didn’t, as I undoubtedly would now, make a diversion out to Escondido to visit the bar and shop. But I was still excited to get hold of a couple of Stone beers just after Christmas through Beer Hawk: not being that close to a regular supply here in Burton on Trent (I mean, why would Burton on Trent have a decent beer shop FHS?). In fact, drinking these beers fired up for me a mélange of California, not just San Diego. A sort of ‘La San Fran Diego’.

From San Diego there’s the understated bullishness, the challenger mentality that comes from being the US’s eighth biggest city, yet squeezed right up against its second biggest. Take the IPA: this is not a beer by halves (or thirds). There’s a spicy, hop leaf aroma that’s full on yet appealingly dry and dusty. The alcoholic warmth is marked but not over-powering, and a mouthfeel that’s chewy, with round caramel and a pearl barley breadiness.

From LA? Well, there’s brashness and confidence; perhaps some artificial inflation too: I mean, the IPA is an umphhhing 6.9% and the Ruination IPA is a wheezing 8.2%. These beers do not whisper into the room. They drop in, in a mechanically powered suit and then blow the head off the guests sitting round the table, pronouncing “I AM Runination Man”. These are after all, the beers that started an arms race. 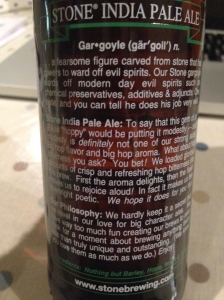 But there’s some San Francisco too, some old school California. A bit more culture, sophistication; keeping something back – the fingerprints of Anchor and Sierra Nevada linger here still. The Ruination for example, makes a strong pronouncement, but it’s actually remarkably restrained. The aroma is earthy and spicy – not fresh spices but roasty and dungy (this, as I have said before, is ‘a good thing’). The alcohol may put hair on your chest, but it’s combined with fruitiness too. Ruination is 100+ IBUs. That’s a lot. Yet it doesn’t drink that way; it has a strong malty sweetness, which acts as a foil, a counterpoise. It’s a ruinously good drop.