Everyone, surely, has a soft spot for a pub snug. Those cosy corners, the fugg of cigar smoke from years ‘BTB’ (Before The Ban) still greasily staining walls and furniture, in what can only be described as ‘Farrow & Ball shades’. The Bridge in Topsham, with its wood-lined snugs, one with a small direct serving hatch through to the bar; the Pianola room at The Yew Tree in Cauldon Low; the back room of The Cooper’s Tavern in Burton on Trent with its tall-backed pews lining the walls, undoubtedly hiding misericords venerating Burton brewers Great and Good beneath.  Yet snugs seem a feature of the past – no place in the huge drinking establishments built by the likes of Marstons or Mitchell’s and Butler today. Snugs make way for ‘covers’ and easy access for the table service and the Hunters’ Chicken.

There’s hope though. A new generation of micro bars, or craft snugs is opening up. Freed from the capital needed for cellars, kitchens and cooling, these bars tend to focus on bottles, spirits and nibbles. And because they’re small, they don’t need to be on the High Street or City Centre circuit, with their requisite ‘high footfall’. They don’t need to think about being chameleons, serving early breakfasts, frothy lattes or renting out to the local Slimming World group. They can just be a bar, with low rent, lower overheads and hours to suit.

Saying that, one’s opened in our village that goes in the other direction. It started as a cafe, working with the exposed beams and quarry tiles laid to earth; making the most of the sagging lintels and trip-hazard floor levels, all in the aid of ‘character’. And now it’s become an after hours drinking snug. What was once someone’s front room, what was once a scullery is now a series of inter-connected shadowy snugs, serving cocktails, cake, crisps and craft beers from wherever takes their fancy. So it was I enjoyed a Nelson Sauvin Pale Ale from The Kernel (Bermondsey), a Snakecharmer IPA from One Mile End (Whitechapel), and a Queen of Diamonds from Wild Card Brewery (Walthamstow). Oh, and there were beers from local brewers too, like Slater’s (Stafford) and Freedom (Abbot’s Bromley), but I wasn’t going to miss the chance to ‘go exotic’ now, was I?  And only one bottle of lager – a rather lonesome Nastro Azzurro peeped out from behind the fridge door. Which seems right – somehow, lager seem less well suited to these snugs of warmth, intimacy and close friends. 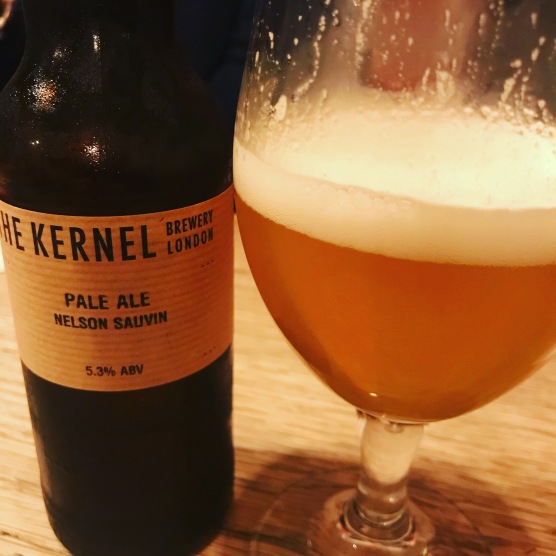 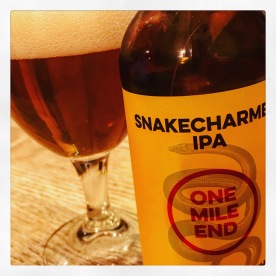 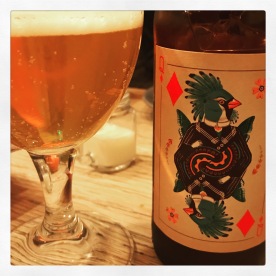 (https://skinnykitten.cafe (site still under construction at time of writing))