Beer Tinted Spectacles was originally posted to Posterous, which closed suddenly and made life irritating for a while. Some of the blogs were lost, recently found and are republished here.

There’s a strange conundrum sitting at the heart of beer. For the most part, it’s a drink best served fresh; many drinkers believe it, many brewers market to it (millions of ‘marketing dollars’ were thrown at the empty vessel of “Born On” dates for example); even smaller scale brewers refer in hushed tones to ‘lager fresh from the conditioning tank’, or cask beer only lasting for days after broaching. Wine on the other hand is, for the most part, a drink best served old, or at least middle aged, with a bit of age, ripening, maturity reflecting the refinement, patience and sophistication of the drinker.

There’s much to it. I have been lucky enough to drink Czech beer straight from the aforementioned lagering tanks. And there really is little to match the softness, smoothness, rich creaminess of it. The same is true of great cask ale – conditioned properly, served fresh from the cask, it is one of the great world beer experiences.

Ironically, what connects these experiences is aging…and a little care. It’s simply that the timeframe is months not years, as it is for wines, but the impact of the time invested is the same. Rounding out rough edges, softening the palate, completing the natural carbonation. And you get to drink the fruit of the brewer’s – and your – labours a lot sooner. Of course, there are plenty of beers that can stand a few years of age. I’ve written before about some English ales (‘Extra Mature’ http://www.beertintedspectacles.com/?p=181), but it’s interesting to see a beer brand actively marketing itself around the impact of age on the taste of the beer.

The beer in question is a Belgian Abbey beer from South African Brewers (SAB), which goes to show that you can’t be too snooty about what you drink or what you write about just because it’s ‘Big Beer’. Funnily enough, SAB have transformed themselves from a company with no brands to speak of ten years ago, to a company with a remarkably deft touch around brands and an interesting, developing portfolio. It’s mostly local ones, but topped off with the likes of Pilsner Urquell, Peroni Nastro Azzurro and now this abbey beer – St Stefanus- as their consistent global offer.

I approached SAB to get some sample bottles and was delighted to receive a trade pack – boxed and ready to go so to speak, with background information on the brand, a beautiful high stemmed, bowled chalice glass and two bottles of the ‘Blonde’ version, one from January 2012, the other from July 2013. The Blonde is a feisty 7%, a higher strength (9%), ‘Grand Cru’ is available too. Trappist¹ and Abbey share a common, religious root. Brewed originally by monks within the specific guiderails of their Orders, like the Cistercian order itself the beers have undergone ups and downs over time. 100 years ago, the beers were rarely seen outside the cloisters of their Abbey, until the travails of two wars and economic destitution were behind them. The common root then branched: those beers still brewed within the Abbey grounds, by the Monks directly became known as ‘Trappist’ after the order of monks who took their name from La Trappe Abbey in Normandy, a breakaway wing from the Cistercian Order. The second branch were those beers that were brewed in commercial breweries under the supervision of Monks and in the style of Trappist beers. These are termed the Abbey Beers. There are more of them – there are only 7 Trappist monasteries in the Low Countries brewing beer – and the styles and quality are more diverse and variable.

To my palate, St Stefanus is a great example. The beer is a complex beast – the malt bill sees pilsner and pale malts, plus some candi sugar, typical of the Trappist tradition, to give a richly sweet wort capable of punchy beers of substantial alcohol content. The hops feature less in the end result but are significant in the recipe: Hallertau and Saaz / Zatec aroma hops receive top billing. An initial fermentation is followed by a settling period of conditioning, before another strain of yeast with its own saintly sounding name – Jerumanus – is added. It is this strain that matures and develops over time; it is this strain that gives the beer its distinctive Abbey Habit.

The literature says, ‘Brewed to mature in the bottle… so you can choose how you want your beer to taste’. I also had a copy of the tasting notes, but I put them to one side, unread, to ensure my personal judgement wasn’t clouded. Rather than specific taste characteristics in fact, I was more interested in whether there really was a difference with 18 months separating them². There was: the younger of the two released a new baked bready aroma on opening, and I poured two thirds clear before mixing in the yeast and completing the pour. A billowing, tight bubbly head with a layered creamy stratification was the result – it was like the ice cream man topping off a Mr Whippy with a final wristy flourish. In the glass, the beer was a ripe lemon rind shade with an aroma that’s part grassy, part fruity, part herby. The flavours were consistent with this, plus a touch of that pear drop like, warming alcohol ‘taste’ (sensation? I’m never quite sure).

The older brother had the confident swagger you’d expect of an elder sibling. He’s been through the hoops, got a bit street, knows the score. And it came through in the colour – I was genuinely staggered by the amount of difference. Here was a brazen, bold, walnutty brown beer, still with an angelic afterglow. The head was creamier still but a little less sparky, less whippy – bored of earlier feistiness, he’s moved on. The aroma was peachy and malt accented, any tang of hops was now a mere shadow; and the taste had more caramel Quality Streets and plump toffee, if you know what I mean – more homemade than Werther’s Originals. I got a taste of pear skin too, like the aroma you get from the skin left on the plate if you’ve ever peeled pears for poaching. As I drank, the lacing was fancy and elaborate; a spider spinning its web on E.

Yet it’s the presentation that tops it all off. The glass is a delight – I hope retailers have got the sense to let the brand use it rather than complaining that they don’t stack or fit in the dishwasher. St Stefanus may not be a Trappist beer, but it’s a damn fine one. It’s a damn fine example too a great beer brand done well: a terrific liquid, a beautiful look and a legend to make you want to talk about it. Perhaps, like the Trappists after all, this Abbey Beer with its strict observance and simplicity will win the day.

¹ The Order of Cistercians of the Strict Observance, an order of monks and nuns. The 48th Chapter of the Rule of St Benedict says, “for then are they monks in truth, if they live by the work of their hands” – beer is brewed to raise money for the monastery.

² The beer is given ‘Cellar Release’ after 3 months, so the beers were closer to six months and two years old in absolute terms.

ABInbev, makers of Stella Artois make the claim that their beer is so special, so worthy, that it should only be served in a chalice. But for a lagered beer, a chalice is all wrong: too wide mouthed to funnel the aroma, too broad and round to allow the fine head of a lager form and retain.  No, a chalice should be saved for those most reverential of beers; beers truly of the highest worth; those from a heavenly source, the Trappist beers. 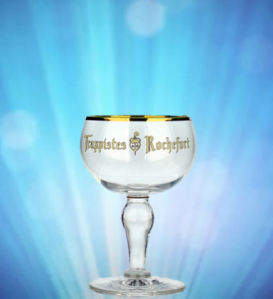 I mulled on this when I finally got my Trappistes Rochefort chalice from The Beer Emporium in Sandbach, my home town.  I’d been meaning to get over there for a while but business got in the way and eventually my parents took delivery. The chalice? A thing of pure beauty, curvaceous, broad rimmed, delicately branded: could the beer match it? And a chalice indeed, fitting enough to be put on a high alter for worship.

Trappistes Rochefort beers are held in high regard. I bought two bottles; one of Rochefort 6, the other of Rochefort 8; beers that I knew by reputation but had only tried the stronger 10 before. I couldn’t wait.  The Rochefort beers don’t use what has become the ‘standard’ Trappist and abbey terminology: a Dubbel (normally dark & sweet) and a Tripel (typically pale, hopper and strong). More simply, more archaically their beers are defined in Belgian degrees: 6, 8 and 10. All are strong: the 6 at 7.5% ABV, the 10 at 11.3% ABV.  All are dark.  All have a sweeter character.

The 8 smells nutty and earthy.  It pours a deep burnished brown; brown like a Tudor dresser, with a creamy head carrying a mark of an espresso swirl from the yeast. The lacing is profuse yet of a gossamer thinness – a thing of wonder, draping the side of the glass as you sip.  To drink there is a sizzle of carbonation from the refermentation, which despite the darker, heavier appearance gives this beer a wild, refreshing spritziness. It is complex and malty with a yeasty, warming alcohol; it is earthy not spicy. It is, ironically, a diabolically good beer.  The 6 is equally complex, equally intriguing.   Whilst not light in alcohol it is moderately lighter in colour with a redder tinge. Like the 8, it is an earthy beer: flavours matching Nature’s colour palate of greens and browns, of falling leaves and New England, yet with dried fruit flavours: raisins, currants and very much the Old World. Is this really the Monks’ session beer? It is humble, but humble in its majesty. 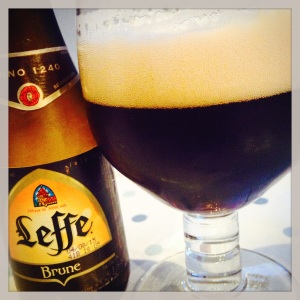 Serendipitously, friends bought some beer over when we had a barbecue a few nights ago; bottles they had bought on a Calais booze cruise. Yes, there were some Euro lagers but also, nestling in the corner of the box were some 25cl bottles of a more religious kind: Leffe. The comparison had to be made. If Rochefort beers are relatively hard to come by; steadfastly uncommercial, then Leffe is at the other end of the spectrum.  The Leffe abbey beers (brewed on behalf of the monks of the Norbertine abbey, Notre Dame de Leffe by A B Inbev) are widely available, even promoted occasionally.  Brewed by the world’s largest brewer, distributed by a sales and marketing machine, it would be easy to assume that they don’t merit mention, don’t warrant comparison.  True, neither have the alcoholic punch of the Rochefort beers; neither enjoy the same complexity; neither brewed with the same heavenly single-mindedness and passion. Yet these are interesting, tasty beers. The Blonde is 6.6%, with an orangey-bronze colour and a spicier nose than those of Rochefort. It is a fruity beer, that easily forms a fulsome head and drinks rather like a spicy wit beer, only with less citrus and even a slight barnyard, Brettonamyces character (which is coincidental). Good, but I preferred the sweeter Bruin, at 6.5%. This is a deep brown beer, presumably with dark candi sugar in the mash; it is more layered; and to drink suggests Christmas cake with spiced apple. A savouring beer; but a devilishly drinkable one at that.  If any of ABInbev’s beers should be served in a chalice, then this would be the one.