This week The Campaign for Real Ale (CAMRA) announced their ‘Revitalisation Project’, called ‘Shaping The Future’. The subtext describes it as a review of their purpose, focus and strategy and has been brought about by the raft of changes and issues that have occurred since the consumer group founded in 1971.

Issues such as scope and purpose: should CAMRA be about real ale only, good beer, real ale, cider and perry or any number of potential combinations and additions? How widely should CAMRA campaign and on what issues?

Issues such as their frame of reference: should CAMRA be about beer drinkers, all alcohol drinkers, pub goers or frankly anyone with an interest? And should CAMRA focus on the on trade, with challenges around declining and closing pubs, often in rural communities and / or should it focus more on the increase in drinking in home?

Issues such as the changing nature of socialisation. In their data, they claim that there could be more coffee shops 10 years from now than pubs, and many of these coffee shops could be serving beer (and unlikely, you imagine, to be serving real ale, cider or perry).

Issues such as governmental pressure: actually it only gets a brief mention, but when you have the Chief Medical Officer and anti-alcohol pressure groups both making (many have argued, deeply spurious) claims about what constitutes a healthy level of alcohol consumption, then whether you’re Big Beer or craft beer, you need to consider your response.

The review needs to be root and branch. The issues are existential, or, at least, they are fundamental to what CAMRA is all about. 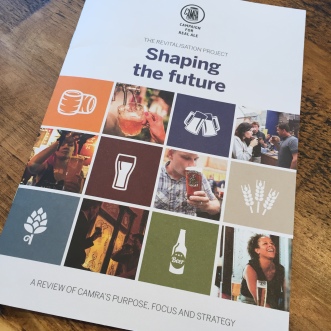 Possibly the biggest issue, wide ranging in scope and for some pernicious in nature is rooted in the rise of craft beers that came about following the introduction of Small Brewer Duty Relief in 2002. A brief background: the increase in the number of breweries was something to be celebrated by CAMRA, they played a pivotal role in the policy and there’s no doubt that the increase in small breweries went hand in hand with the increase in number of cask beers available, not just because of our brewing and drinking culture but also because the process of brewing and packaging cask beer is more straightforward (which is not to say it is easy) and fundamentally, cheaper. There’s no need for pressurized kegs, expensive pasteurisation and filtration systems, automated filling machines and all the paraphernalia that attends filling kegs. With beer in casks, the ability to keep, handle and deliver a quality product is as much the responsibility of the publican as it is the brewery, if not more. And there in a nutshell, is the rub. Many craft brewers, not just the more ambitious, but also those dedicated and passionate about quality soon have an issue with cask. Put simply, that precious quality is just too variable. The result: more investment in kegging; more stimulus from the U.S. brewers (untroubled by the cask / keg question) and more ‘craft keg’ beers available.

Skip back 40 odd years to see the parallels. The ‘Big Six’ breweries actively managing down and phasing out their cask beer due to, you’ve guessed it, the variability in quality (amongst other things, like cost), often put down to the lack of training and skills of publicans. There were, of course, many publicans then, just as there are now who could serve a cracking pint of cask. And there were many, probably more, who find keeping cask, fettling it, tapping, spiling, broaching – all of that – troublesome and perhaps not worth the effort.

Another issue for cask is seemingly prosaic but critical – yield. In a keg, the central spear reaches down through the inside of the keg and almost touches the base. The beer is propelled out using a dispense gas. Finish one keg; wrench off the coupler, attach to the new keg, carry on serving. Industry estimates of waste from a keg put it at around 5-8%. Not so with cask. More beer is left in the cask (some because it is the yeast sediment, the remainder due to the cask shape) and more is lost as the last drinkable beer splutters through from the old cask and the first draughts are pulled through from the new. And then there’s the beer left in the pipes overnight, which (you hope) is pulled through and discarded. How much is lost? Well estimates vary from 15% up to 30% and more (that’s from an industry source by the way, not an arbitrary guess). Put simply, it’s very easy to pour 30% of your profits from cask down the plug-hole.

Which is not, in any way, to say ‘give up on cask’. But to not recognise – and in this case, for CAMRA to not fully recognise – that today, the situation is wholly different that it was when they founded. We are not talking about replacing Draught Bass with Worthington ‘E’. We are not replacing Courage Directors with Watney’s Red Barrel. We are not talking about getting rid of John Smith Magnet and shoving on Webster’s Yorkshire Bitter or Trophy Best.  We are talking about a bar or pub having a crack at selling any one of thousands, literally thousands, of exciting, tasty, experimental, classic, not-quite-right, full on, challenging, mundane, surprising beers that just so happen to be packaged in a container called a ‘keg’.

As someone who runs a brand building company as my day job, there’s an interesting parallel here and something for CAMRA to consider. Whatever they do, they mustn’t believe that ‘the job on cask is done’. The revival of cask beer has been sensational, but despite appearances to the contrary perhaps, it remains fragile. Most beer drunk in the UK is keg lager. Pubs are closing at 27 per week (according to CAMRA) and many, many more remain unsustainable. In a typical bar, there are only a few cask lines, and now with the amount of new breweries, there is so much choice for the publican that running a small cask led brewery is horrendously tough – commercially in particular. Lay on top of that all the issues with keeping cask, serving a high quality product and lower yields and the odds remain stacked against it. We need cask champions still. We need a consumer group fighting its corner. We need to keep on educating publicans to the wonders of cask beer and the criticality of quality. We cannot afford to get bored or distracted. CAMRA must keep the core of what they do – protecting real ale (and for me real cider and perry too – they probably need the help even more) – keeping it alive and fundamental to their central purpose. Great brands keep their core dynamic and fresh. CAMRA’s core is cask.

Yet great brands also focus on what’s coming up – what’s new and may be the ‘core of tomorrow’. So CAMRA must have a duel focus on cask and great beer, no matter how the brewery chooses to package it. Of course, ‘great beer’ is subjective. Pilsner Urquell, served from the tank at The White Horse in Parson’s Green is delicious. It is ‘great beer’. But PU, like many others is now a cart horse in the stable of a large multi-national, consolidating brewery. Not only do they have enough money to look after themselves, they are also only driven by profit. If PU proves to be a challenge to grow, it will sadly be reprioritised or even discarded and the focus will move elsewhere. So we are talking about a different form of ‘great beer’. CAMRA must champion beer from independent brewers, who are fashioned as much from sharing their passion, championing brewing and brewing heritage, making products with integrity not just efficiency, as they are from making a decent wage. And not just small brewers either – but independent brewers. From Elgood’s to Fuller’s, from Brew By Numbers to Magic Rock, from Marston’s to Skinner’s – even, whisper it – to BrewDog too.

Because let’s be clear. CAMRA have done a terrific job saving cask beer. But the independent craft beer ‘movement’ has done a significantly better job in making the whole beer category fresh and vibrant and attractive to people wouldn’t have even considered beer in the past at all. It might not have been directed nor seem coherent, but it’s done it – and in a quarter of the time. If CAMRA isn’t willing to stand for that, then it deserves to lose its relevance.