“Certain things, they should stay the way they are. You ought to be able to stick them in one of those big glass cases and just leave them alone.”  ― J.D. Salinger, The Catcher in the Rye

As my bank of memories grows, so I find myself experiencing moments of involuntary recall. Tiny cues can stir up vivid recollection, just like Marcel Proust and his tea soaked madeleine cake, prompting memories of his aunt’s home during his childhood. Sometimes these are powerful personal memories, connecting me to a time and place – the caw of a crow, an oily chain, or an early evening afterglow behind a stand of trees. More typically they are far more prosaic – and one, bizarrely, concerns rye.

Specifically, it concerns rye bread: not the crusty, spicy loaves you get at a good bakers nowadays, but the German squares; tight plastic packed in brick like solidity. I first really tried them at a friend’s in Stuttgart – her family had pumpernickel every morning as part of the breakfast routine, sliced thinly like crushed soldiers, but topped with hams, cheese or pickles rather than dipped in egg. I liked the routine. I liked the rye bread. Still do, but it doesn’t form part of my rituals except on holiday when I tend to buy it as the most interesting bread on offer.  But the rye bread doesn’t take me back to Stuttgart; it takes me back to somewhere further east, the town of Regensburg on the Bavarian Danube.  It’s a beautiful UNESCO protected town, mercifully spared from Allied Bombing for the most part. There, a few years back, I stayed for a couple of nights, toured a few breweries and ate local delicacies: Regensburger Würstl, fine but chunky pork sausages, halved lengthways, cooked over charcoal and served with onions and tangy mustard. Dampfnudeln too, soft bread rolls that made a lovely, moist sausage butty and reminded me of Manchester barm cakes but done Bayern style. And all washed down with roggen – rye beer.

I don’t think roggen is a Regensburg thing necessarily – certainly rye is used widely in other beer brewing countries: in fact I remember being on a bit of a wheat beer phase at the time, searching for both hefe- and Dunkelweisses; but the roggen was new to me; in fact it was my first experience of a rye beer at all. So it happened to pass that the roggen, the würstl and the dampfnudeln make up my rye ‘madeleine moment’; a beer garden parallel to the the Danube overgrown by vines and starlight clematis; a warm evening with the smell of charcoal & pork skin, Herr Ober, good food and glisteningly dark glasses of roggen beer.

Two recent prompts caused that Danube beer garden to return. One was seeing – and trying – a bottle of the very beer we drank that evening, Thurn und Taxis Roggen. The other was a beer from much closer to home, Marston’s ‘Revisionist’ Rye Pale Ale.  Thurn und Taxis was one of the Bavarian Royal breweries, although since I was there, it has ceased its own brewing and contracts out to Paulaner, who in turn, are part of the Heineken / Brau Union combo. Sad that, as the brewery was in a palace and was incredibly picturesque. And sad too that the beer was a shadow of my shadowy memory of it: that memory is of a spicy, bananary, clovey beer (but not a wheat beer) with a thick off-white head and a ruddy luminescence. Today’s version is thinner; less pronounced in every sense, less bold, more…. ordinary; more… brown. I didn’t finish it, for my memory’s sake. 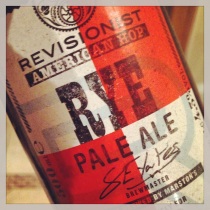 The Revisionist Rye is a different kettle of fish. For a start it’s a top fermenting pale ale; 4.3%, and Marston’s are promoting the hop as much as the rye, including dry hopping with Amarillo and Citra.  Yet, in truth, it was something of a disappointment: don’t get me a wrong, it’s a good beer, I enjoyed it. But really, the only touches of rye could be seen in its colour, a slightly more reddy-brown than a pale ale and a faint spiciness (allspice?) – but faint is the word. As you’d expect, the hops shone through, particularly the citra lending the beer a grapefruity edge with a pleasingly mouth-puckering finish. The beer is dry hopped – you could tell from the moment the crown was cracked.  But no aroma of rye; no wry smile.

Perhaps my Regensburg beer memory is best left in a glass case after all.