A long time ago, in a brewing region far, far away… a shadowy, cobweb filled, ancient brewhouse. Thick oak beams, knicked and pocked by the barrel hoops, rivets and clevises of time.  A guttering, rasping sound disturbs the peace, as two beers struggle for supremacy in an imaginary fight to the death; one magnificently dark, white crowned, resplendently attired in an oak-staved, bulging and lidded wooden stein: Dunkel Vader. He towers imperiously over a smaller, golden lagered beer, shimmering as a diaphanous, dust-speckled shaft of light struggles to peak through an upper window: Blondwalker.  Spiders, undisturbed for many a year, scuttle away, dancing fearfully in quickstep on pin-point feet along the wooden beams into the rafters. Wild, airborne yeasts disturbed, use the gentle thermals to waftily escape through slatted brewery vents. Dunkel Vader speaks. ‘It is useless to resist. Don’t let yourself be destroyed as pale ale did!’    His tones are deliberate now, malevolent. ‘You do not realise your potential…join me and we will end this destructive conflict and bring order to the beeriverse’.

Stooping low, quivering on the edge of falling, Blondwalker musters all his defiance: ‘I’ll never join you!’
But the dark beer looms larger now, pushing his foe closer to the brink: ‘If only you knew the power of the dark side.  Your brew master did not tell you everything about your father.’  Blondwalker spat in retort, ‘He told me enough! He told me you killed him!’

‘No!’ rasped the dark beer furiously, ‘No!  I am your father, I am the original lagered beer…!’

Prague, Bohemia. 1992.  The return leg of a spoon shaped journey through Germany, across the black-forested borderlands to Prague; then down to Bavaria – Passau, Munich, Regensburg – and back round and up, to half-timbered, medieval Bamberg, before heading back home along the spoon handle to Calais and Blighty beyond.  For my brother and I it was a journey inspired by the Michael Jackson’s television series, to discover our own beers, and guided by the Beer Hunter’s pocket sized ‘International Beer Guide’.  We knew of course that many had trodden this path before, but that didn’t lessen the journey; didn’t erode our sense of adventure; didn’t end the hope of finding virgin territory.

Great beer was the goal of that trip: and proper, lagered beer was the supreme discovery* – not what we were accustomed to at home  – but a family of beers as broad and at times as shocking in flavour, as varied in texture, as distinct in appearance and strength as were the ales of the British Isles.

Back then, discovering that the first lagered beers were dark was a revelation.  That they preceded, sired, what we now know as pale lager seemed unimaginable. But dark they were, these dunkel beers.  In Prague, we drank in U Fleků, where then, as now, only one beer was sold: Tmavý Ležák. A lagered beer, but one as dark as liquorice with a tea-stain white head poured directly from a bulging copper vat above the bar, itself fed straight from the brewery above it. We supped it down with a thick, oniony goulash and ever-expanding dumplings in a dark-wood lined room, as dark indeed as the beer we drank. We became impervious to the cold outside.

Munich, West Germany, 1992. Days later, in the Bavarian capital, we drank early morning in the stone vaulted Augustiner Hof a crisp, beautifully structured helles and a beguiling dark lager – a dunkel bier.  Not black like stout; rather, if held up to the light it was brown like rye bread, softening to the edges and topped with a contrasting white head, deep, thick, pillowy.  We drank it with Weisswurst, delicate, steamed veal sausages, but the dunkel bier did not overpower or spoil; rather it contrasted, chaperoned, augmented.

Bamberg, Franconia, 1992. Further north, in the legendary land of the Franks, we stayed in Bamberg in a beautiful gasthof near to the river. We walked up to the square-setted market place and dived unwittingly pell-mell into the maze of snickets tracing the ancient town plan.  In the end, Klosterbräu found us: a lovely wood-lined snug and a fug of conversations from hundreds of years lining the ceiling.

We drank beers; the Schwärzla another dark, lagered beer, blacker now as you’d expect from its name, but no astringency or bite that you might presume from a dark beer; no fight; just a soft yet rewarding crispness and enveloping, savouring, mouthfeel.  Later that day we allowed our taste buds to be assaulted at the Heller brewery – brewers of rauchbier. Aecht Schlenkerla Rauchbier is sensory overload with smoked sausage, wood fires and a nip of burnt beer flavour, but a dark lager all the same, just containing a proportion of smoked malt in the grist bill.

Lord John Russell, Marchmont Street, London, 6th July 2006. A sighting so rare, twitchers began to descend on the place. A Czech dark lager, on tap: Budweiser Budvar Dark or Tmavý Ležák. I remember it as rich, complex, yet by now unsurprisingly moreish. 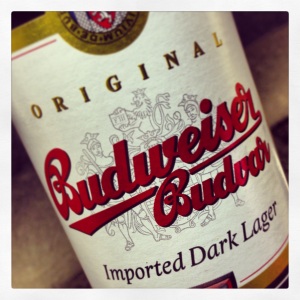 Years later I buy a bottle to rekindle that day: a coffee cake head with tight bubbles protecting a molasses brown beer with a soft, rounded mouthfeel and a clear espresso character, both in aroma and taste.  A spirited but tight carbonation revealing the truth – that this, despite the darkness is a lagered beer. Moments later we celebrated with strangers as London won its Olympic bid. The day after, we mourned.

Today.   Despite the lineage, where today are the original lagers? Occasional dark lagers grace our shelves, only to be revealed as caramel emboldened imposters.  Few, true dark lagered beers make it to our shores; few true, dark lagered beers are being brewed in our craft beer revival.  Is it an expectation of a challenging taste? Is it an expectation of chewy texture and lack of refreshment?  Are dark lagers simply too counter-intuitive for today’s sensibilities?  Whatever the reason, the truth is that out of the dark came the light.  And it’s time to embrace our dark sides again.

* Being pedantic is important on this topic: see http://www.beertintedspectacles.com/lager-part-3-lager-is-as-lager-does/