There is no more powerful, evocative and sought after beer idyll as “drinking lager fresh from the lagering tank”.  It is beer perfection exemplified. It is a notion so laden with positive association that it has reached almost mythic proportions. Here we have it: beer as beer should be; beer in the state that the brewer themselves would want you to enjoy it.  Beer that is fresh; is still conditioning; is so lively with natural carbonation; so ever-so-slightly hazy:  is alive. Beer with a gushing, foaming head so unctuously thick, so heavenly white, so unfailingly deep, so velvety creamy that you will think all your Movembers have arrived at once. This is state of grace filled with nostalgia, pining and distant hope, for it is a dying art.

I consider myself lucky enough to have drunk beer from the lagering tank three times: twice in the Czech Republic, once in the U.S. The first time was in the cavernous lagering mines under the streets of Prague, the tanks of Pražské Pivovary, the tanks of Staropramen. It is no overstatement to say that few times in my life have I been speechless with awe, wonder and reverence.  It was truly a near religious experience;  to step down the slippery steps, becoming ever damper, ever cooler, ever gloomier. The Cold War flicker of a lone fluorescent tube our only company. Footsteps bouncing, echoing from the stone floor and low-vaulted ceiling.  And then, turning the corner;  row upon row of enormous white lagering tanks stretching off into successive vaults. Countless tanks, endless caverns, dedicated to beer worship; floating, seemingly like innumerable whales, gently swimming below the surface.  Each tank delicately coated in a thin, glittering layer of condensation. Each tank slashed with the rough chalk marks showing when it was filled, tested, and when it will be ready to broach.

The second time years later was a similar, but further to the north west in the hop growing area of Žatec; again, rank upon rank of lagering tanks, slightly worse for wear, revealing the more straitened financial situation of this brewery compared with those in Prague where the streets are paved with Stag-Do Gold. But it was equally charming, equally moving – knowing that a brewer was dedicated to the considerable investment in time and expense of lagering their beer properly. Knowing that a brewer was still determined to sell proper lagered beer with the roundness and softness of palate that no short cuts can match.

The final time was modestly different, sampling different beers from the Sandlot micro-brewery under the Colorado Rockies baseball stadium at Coors Field. A few were sampled that evening, from a well known wheat ale, to a caramelly amber ale, but the Barman Pilsner was the highlight.  It sprinted through the pig tail into the glass, seething and swirling as it went, displaying that rounded, full character that I had tasted before. From a cellar in Colorado echoes of Bohemia could be heard.

No surprise then that lager brewers are trying to find ways to export – figuratively and literally – this state of lager grace to build their brand and reputation. It’s a drum a few of us have been beating for some time and now the reverberations are being heard.  Perhaps it is a case of necessity being the mother of invention as two very famous lager brewers are at the vanguard: Budweiser Budvar and Pilsner Urquell (PU).  Both have been struggling for traction in the UK in recent years – Budvar to grow their franchise, PU to gain a sustainable market foothold here.

I tracked down PU first, eventually making it to a long overdue visit to the White Horse on Parson’s Green. Unsurprisingly, given the justified reputation of this pub as a leading voice in the beer revolution,  SAB Miller, the owners of PU, have chosen the White Horse to invest in; a tank has been fitted in the pub cellar purely for unfiltered PU.

Beer tanks are old school. When I joined Bass, in my first few weeks I did a trade visit up to a working men’s club in Sheffield. It was a Stones’ club. At the time, Stones was Sheffield. And Sheffield steel meant huge pubs, huge men drinking huge quantities. So out back was a beer tank; the capacity I can’t recall, but it was a big as a farmer’s grain silo, pitched on its side. There was a glass gauge that allowed you to see the beer level: I watched  in naive excitement and not a little terror seeing the level of the beer gauge drop as I stared at it. The beer was the freshest you will taste on these shores: cellar cold, with a crisp, hop bite and thick Yorkshire head sitting on top.  It never hit the sides. Yet, not long after, the tanks were gone; the cost to maintain being the argument, financial as always.

And as so often is the way, the circle comes around.  For now, in an act of post industrial irony, the beer tank has been gentrified – and the Sloany Pony is Exhibit A.  The PU was popular too, served from a Czech twin valve font, where you open the first valve fully first, then adjust the second valve as it flows to perfect the head. The glassware was the Czech equivalent of a dimple: another circle coming back round.  The most notable feature was the aroma. It was grassy and fresh before the head was broken. The pour was a delight and I didn’t complain when it the beer was slightly below the line because the proportions were right. The first sip was another delight, drinking through that head; breathing in the beer before it touched my taste buds. To taste: there was still the assertive hop forward character you expect from PU – if anything more assertively bitter than pasteurised stock. But the aftertaste was markedly more bitter yet, in fact a touch astringent – the opposite of what I had expected.  I struggled through it however…

Budweiser Budvar are taking a different approach. Their ‘Yeast Beer’ heads over in kegs filled from the lagering tanks. It means distribution has to be strictly controlled and the beer 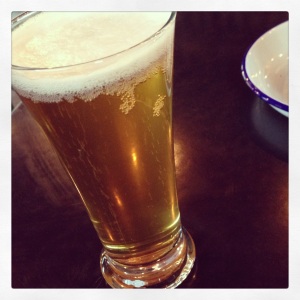 needs to be consumed within a week.  I found it in the Draft House on Charlotte Street, London: in fact, I only just found it. There was nothing on the font plaque to indicate it was different from the normal Budvar; no distinct glassware to justify the premium being paid. There was nothing in short, to support the beer idyll of “lager fresh from the lagering tank”.  Shame that.   Unlike the PU, the Budvar Yeast beer was markedly cloudy; as if it had received a little shot of yeast at the pour. And it too, wasn’t hugely different from bottled Budvar, but in this instance was softer, more gentle on the tongue and without the pronounced ethanol note you find in the bottle version.   Other clues were there too: a series of lacey white tide marks left as you drank it; a fuller, yet still delicate aroma.

The experiment for me is achieving mixed results: the reason fresh, lager tank beer is so evocative is because of its rarity.  You’ve got to want to try it; you’ve got to want to make that trip; you’ve got to want to hunt it down. But it’s hard yards – of course it is, otherwise everyone would do it. And the links in the chain are fragile. A fancy pour awry here; an overly foamy pint there; the wrong tap marker here; an unbranded glass there…  and the whole house of cards falls.  The tanks may be back, but the big guns haven’t nailed it just yet.

2 thoughts on “Lager, Part VI: Bring In The Tanks”