“The grass is always greener on the other side”, so sang Glaswegian post-Britpop crooners, Travis; “the neighbour’s got a car that you wanna drive”.

Dear old Fran Healy, where are they now?  Mind you, it would be easy to agree with his sentiment when considering this month’s blog topic – the perfect beer world.  For UK readers, it could be like the latest British Gas adverts – idyllic & psychedelic pints of frothy ale, always full, never drunk, in carefree orbit around our mini planets. But really. Where will it take us this navel gazing at a Beer utopia? Frankly I don’t see any positive value in that exercise – so in true politician’s style I shall answer the question my own way. And it’s still a good angle because the trials and tribulations of life are written into the weft and weave of beer itself.

The lesson of time immemorial.  From fantasy worlds like Star Wars or Harry Potter; to the real world –the motivations are the same.  Good versus evil;  failing, getting up and trying again, or just staying down. The big guy vs the little guy. Of man and woman, race and religion, tribe or creed.  And it’s all here in ‘Beer – The Board Game’¹.  Let’s consider the United Kingdom as said board game to illustrate.

The playing surface plots international brewer against start up micro; of wholesaler against cash and carry; of national pub chain against a family run independent pub; of government policy against pressure group set against a three dimensional backdrop of street scenes inspired by market towns the country over. And we have our equivalent of  ‘Chance’ cards?  The rise of teetotalism (‘Go To Jail. Do Not Stop at The Red Lion’); the growth of non-alcoholic drinks, coffee in particular (‘Advance to Starbucks. Lose 5% market share’); the media stoking the flames of ‘binge Britain’ or neo Prohibitionists in the US (‘The local authority orders you to clean up the vomit. Lose 2% market share’).  Oh, and good ones too, like (‘Cask Beer Reports sector in growth by 2%.  Collect 3 free beer tokens’).

But this is a board game: players will win and players will lose.  If you work for Waverley TBS, my genuine commiserations; if you work for Punch – your business model doesn’t seem to be working fellas, maybe take a look at it again.  The government, with its incessant and anti-competitive above inflation duty rises… well they are doing the equivalent of perpetually building hotels on Park Lane – but one day the property bubble will burst and the rents won’t come in.

Beer is playing out the game. From some angles it seems precarious – per capita consumption in western markets is falling…but in eastern, emerging markets it is growing.  The inexorable rise of pale lager is being challenged: indigenous and new beers are appearing again, and like life, the fun is in the hunt, in taking part.    Elsewhere spirits are back in growth or the growth in cider threatens ‘the pint’.  They are players in the game and they have every right to try and win. Pubs are closing at an alarming rate, but some of the best bars ever are opening up and down these islands.  Supermarkets are slashing the price of beer…. but they are dedicating ever more space to speciality ales and lagers.   No, the perfect beer world is here warts and all, best that we see the game board, get stuck in and plan our moves ahead. 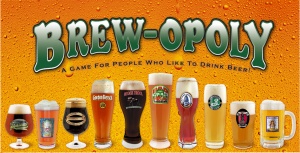