There was a case of it dustily resting behind a shabby curtain in a rented house. Not an old suitcase but a proper case of old beer; thick, corrugated card on the inside with dividers between the bottles and brightly decorated, old-school style decoration on the outside. On opening, red and silver crowns looked up at us like baby birds expectantly waiting for the next worm from their mother.  This was a beer I hadn’t heard of at the time and was long out of date: Worthington’s White Shield.  It was the early ‘90s, but the beer had gone out of date in the late ‘80s.  Back then, my brother worked in beer distribution and when they closed an old warehouse in Wolverhampton or Grimsby or some such place, a few pallets of mysterious, out of date products had been found – in the days before SAP operating systems this sort of thing could actually happen.  It seems that they were products returned by customers because they had damaged labels, but as far as my brother could see, only one bottle in the 24 had a scuff.  So he happily handed over a couple of blue notes and carefully sat two cases of the beer in his boot.  From there, the last leg to his ‘cellar’ behind the dusty curtain could be transacted. 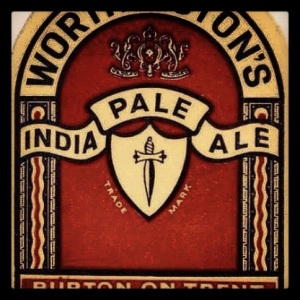 Not quite the label on the mystery bottles, but not far off.

My brother you see, was in the know.  Not only did he know about White Shield at the time, a beer often referred to in hushed reverential tones, but he also knew that on big beers, proper beers, a sell by date was misinformation.  That’s why he had tiny nips of Thomas Hardy’s Ale uncomfortably lying at funny angles in his wine rack – decorated with thick gold foil and wire and string wraps over their crowns.

White Shield has travelled, in many senses of the word.  Born out of one of the Worthington brewery’s original India Pale Ales, it fell out of favour after Bass and Worthington merged in the 1920s as gradually focus fell onto the red triangle.  But for years, decades in fact, the beers were kept separate, Bass becoming predominantly a draught beer (red triangle on draught, blue in bottles) whilst Worthington’s India Pale Ale got renamed ‘White Shield’ and stayed in bottles. It also retained its secondary bottle conditioning – the art of adding a small glug of yeast before sealing the bottle. This seemingly inconsequential but tricky act is the key to bottle aging.  White Shield was also travelled during its many unloved years, being brewed by King & Barnes and Shepherd Neame if I recall correctly. Today it is brewed back in Burton at the National Brewery Centre and bottled by Fuller’s (who have the kit to add yeast for bottle conditioning).

Sadly I don’t remember the taste of the bottles found behind the curtain. I do know that they were 7 years past their drink by date, that the colour had a canal murkiness but the beer got drunk.  And it did leave a mark, as to this day, I age White Shield…and just last week I broached a case of 2007 ‘vintage’.  White Shield tasting notes normally conjure up cake. Not Victoria Sponge with cream and strawberry jam but deep, dark fruit cake, all raisiney & packed full of currants, glace cherries and shavings of almonds.  I always consider it a malt led beer with just an edge of oranges or citrus fruits. When young, it also has a distinct sharp, metallic character, is a bright red brown and tastes strongly alcoholic despite its modest strength (5.6% ABV). So it’s a cracker, no doubt.

Yet it’s a cracker that gets better with age.  The beer I drank last week would have been brewed in January 2005, its use by was July 2007, so that means it had over 5 years of additional bottle aging, 6½ in all.  And it drank much softer, with just a slight vinous character like Madeira or sherry. Its colour had darkened substantially, conker-brown now like Tudor furniture. Hop character was virtually non-existent but the malt complexity was as pronounced as ever – with none of the harsh metallic edges. Still a cracker, but a cracker of a different kind.  We’ll see how it stands up to another few years.  The only rub is the yeast, or lack of it. When my brother and I drank the beer from behind the curtain it had a centimetre of yeast at the bottom.  You had to pour with a steady hand which given the murkiness, we failed to do well enough.  But the 2007 vintage has a mere dusting across the bottom of the bottle – less yeast, less secondary fermentation, less potential to develop character. 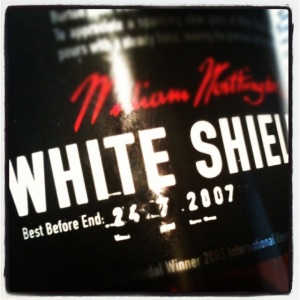 Proof of the fruit pudding is in the drinking

Saying all that, a famous beer brand stoutly advertised for many years that ‘Good things come to those who wait’. Right message. Wrong brand.

One thought on “Extra mature.”