One Beer to Rule them all.  Of course, for any lover of beer this is an impossible task, yet a beautiful, playful one at that.  So I saw the subject of this month’s Big Session blog and decided, no matter how difficult it proves to answer it.  To find the one beer to rule them all.

But why impossible?  For many drinkers, perhaps it is easy just to pick one beer and say, ‘that’s it, that’s the one. My beer’. Not for me.   It’s the seemingly infinite number of great beers available today, increasing seemingly exponentially that talks about the healthy future for beer.  There’s even new styles emerging, either inspired by the past or just the crazy playthings of brewers willing to mash concoctions into something drinkable.

What should go into consideration – what makes a Beer a pretender to the One Beer Crown?  How about balance?  That subtle interplay, that dance that a great beer has from the initial aroma, the dimensions of its taste, its appearance and its presentation.  I choose beers on each of these alone.   Then there’s moreishness.  I remember a great quote from a beer executive that I used to work for – “The great thing about our beer is, it’s drinkable”. I kid you not.  Actually, I know what he was driving at:  there is something great when you have a beer, and from the first sip it’s enticing you back to a second.  Often because that thing that attracted – the aroma, or the taste say – you want more of, or often because you can’t quite put your finger on what makes it great.  For me, this is a sign of a great beer, and narrows down my list.

And versatility.  I’ve lost count of the number of brewers who bang on about beer and food, and not really know why this is important other than a band seem to be on a wagon.  I like my beers to be versatile – fundamentally they must stand up on their own right. They must be intriguing, moreish, and damnably tasty. But I want it to go with my pizza on a Friday night and be able to stand up to Fajitas too. That’s a lot to ask – so it narrows the list further.

There are other variables. Patriotism is one.  I’m proud of great British beers. I am happy to admit there are beers in my repertoire that aren’t in my Top 10 best ever beers but that I want to drink because I want them to continue brewing what they do.  And memories. Budvar is a beer that I’ve drunk on some happy times in great places. So it’s up there for me….but that alone is not enough.

Ah, the tyranny of choice, and a spectrum of considerations from tangible on the one hand to seemingly irrational on the other. But I will get to it.  I’m not going to list my Top 10. I’m going for the jugular.

My One Beer combines complexity of taste with moreishness; multidimensional taste reward with just the right amount of alcoholic hit;  a bottle shape I love and a label design I wished I had designed myself. Its presentation invariably fires up my pleasure neurons with a thick, tight white head, and copper colour.  The story of the brewery – from start up to boundary pushing present day;  where it’s from and the appeal of the lifestyle.  In short, it’s got everything. It is Sierra Nevada Pale Ale.

This being the case, it is only fitting to finish in lamentable tribute to the inspiration for this month’s theme…

…and, of course, to reserve the right to change my mind next time round. 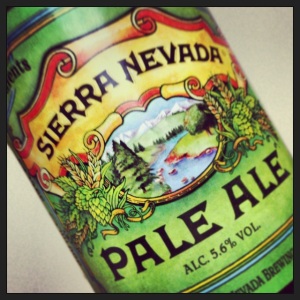